I arrive home on what must be the coldest day of the year to a dead robin on the doorstep and a telephone call inviting me to make a will. The dead bird is the work of Alfie the cat. I don’t believe for one minute that cats leave dead birds at the front door as some kind of gift. They leave them because they are angry. In Alfie’s case, very angry. Someone has forgotten to buy him pouches and for the past 48 hours he’s been forced to eat Go Cat biscuits instead.

After 24 hours he voices his protest by pooing on the bathroom mat. A lovely early-morning greeting for Tom as he stumbles in there at 6am, still half asleep. As this cry for attention does not get the desired result, he enters phase two of his feed-me-something-decent plan: go on a killing spree. Hit the humans where it hurts, he thinks, kill a bird they care about! The chickens have got too big to square up to now but the robin…..the robin would be perfect! The family all love him and he’s easy to find because he’s always on the fence at the back of the garden.

Ollie cries when the news is broken to him of the robin’s demise and demands to see the body, whilst Daisy gives her beloved Alfie a loud telling off with lots of wild hand gestures. The cat looks confused then hopeful that all of this will result in a Whiskas pouch. It doesn’t. Daisy puts him out as he doesn’t seem the least bit remorseful.

(This three-paragraph cat digression might have to be edited out when Tom gets home. He’s under the impression that other people do not find the imagined workings of Alfie’s brain as amusing as I do.)

Back to the freezing-cold Thursday and the depressing homecoming. I realise, whilst defrosting my hands on the hall radiator, that I’ve come home from town without the birthday present I bought for Tom. I groan, having no idea where it might be. On the bus? At the cafe?

Suddenly something catches my eye. It’s a shiny purple rectangle. I pick it up and see that it’s a chocolate bar with a note attached with an elastic band. The note is addressed to The Top Writer. I suspect it might be correspondence for Ollie. He recently started on his Christmas thank you cards but he only got as far as making a card for the postman, thanking him for all the parcels he delivered over the festive period. As Ollie’s only just learning to write and he was left to his own devices at the kitchen table, I have no idea what his card said. He just presented me with a sealed envelope addressed to Tony in yellow felt tip.

I prise the note off the chocolate and read it. It is indeed from the postman. A tear comes to my eye:

….your writing is very good, possibly even better than mine. Be good at school and listen to your mum, you only get one of them.

Ollie’s not been the only one writing this week. Daisy has done a three-day story writing course at school with Mrs. Mann, a real-life writer. (Mrs. Mann’s name has caused more hilarity than it should. Ollie thought she might be married to Mr. Lady).

Daisy is so bitten by the writing bug that she comes out of school, head in notebook, madly scribbling away in illegible gold pen. I can’t get any sense out of her the whole way home. She’s still writing when I go to tuck her in at night.

I hesitate, having the good parent/bad parent debate in my head: washing up still to do, dirty clothes to sort….. Good parent fortunately wins and I get into bed with her.

I really hope the mother-character of this story is not based on me. This woman does a lot of nagging and is not on great terms with her husband.

The premise of the story is a girl called Ivy who finds a crystal ball that can tell the future. The ball tells Ivy that something bad will happen to her friends so she smashes the ball and everyone lives happily ever after.

“Mmm good writing,” I say, “but the plot could be a bit more gripping.”

“Well something bad could really happen to her friends and then you don’t know if it is a coincidence or because the crystal ball does tell the future.”

” What about a school mini-bus accident?” I suggest.

Daisy looks at me as if to say what kind of sick mother are you?

“Ok, ok,” I backtrack, “the story’s great so far. No need to change anything.”

The next morning, the story still isn’t finished and Daisy is in a state about getting it to Mann on time.

“Don’t worry,” I tell Daisy, “just ask your teacher if you can finish it at break-time.”

Unfortunately, the teacher is not on board with my staying-in-at-break suggestion and Daisy, in her desperation to complete it, spends play-time locked in a toilet cubicle writing furiously on the loo. On the plus side, she’s come round to my way of thinking plot-wise and the story takes on an altogether grittier edge.

This voracious writing carries on into Tom’s birthday weekend. When I ask the kids to set the birthday breakfast table, Daisy is unable to assist because she is writing to the Queen. Then when Tom finally emerges downstairs at 10am looking fragile (this will happen if you stay out until 5am; “He’s 37! Not a teenager!” Pops exclaims when I tell him why he can’t wish his son a happy birthday at 9am), he is presented with a card from Daisy detailing the ways in which he has succeeded in all areas of dad-hood.

Yes, this has been an epic week of writing and of cooking. Tom was lucky enough to have herb pancakes with smoked salmon made for his birthday breakfast. I got the recipe from the wonderful Intolerant Gourmet cook book by  Pippa Kendrick http://www.theintolerantgourmet.com/ and they are gluten and dairy-free. On the downside, Tom couldn’t stomach much and the children were suspicious of all the green bits, but at least the chickens and I enjoyed them.

What was much more popular for breakfast was the homemade bread, and butter(!) given to Tom by our friends, Iain and Hannah. I mean homemade butter! Surely the best food gift you can give to anyone and it tasted A.M.A.Z.I.N.G. 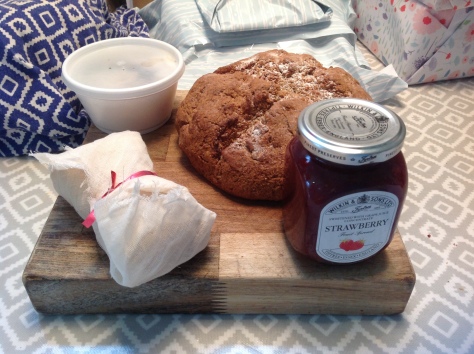 Tom received many culinary gifts for his birthday. Ollie made him monster cakes (aka chocolate crispies with a lotta sprinkles on top); Daisy made him cheese scones; and I made him a chocolate chestnut cake which finally used up the tin of French creme de marrons which has been in the cupboard for too long, but which actually turned out to be the best gluten free cake I’ve ever had. http://www.theintolerantgourmet.com/journal/2010/12/19/chocolate-and-chestnut-cake.html 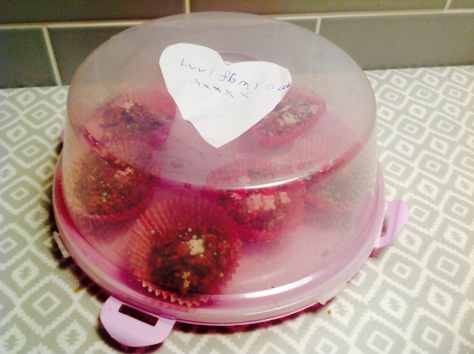 After a hearty birthday walk to Baconsthorpe castle to blow the cobwebs away, we finish the weekend with a beef and mushroom pie (first time using gluten-free pastry). We forget that the beef had been cooking in the slow cooker all afternoon, and as we come in from the cold and dark, we are greeted with a delicious smell. Only Ollie, our resident vegetarian, is unimpressed with this offering, instead opting for more of Iain’s bread and a boiled egg. A perfect way, actually, to celebrate today being the first day that all four chickens have started to lay. Surely the best birthday present of all? 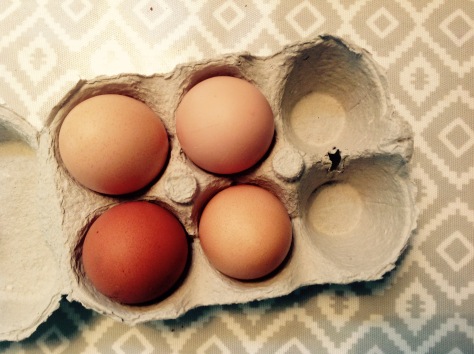