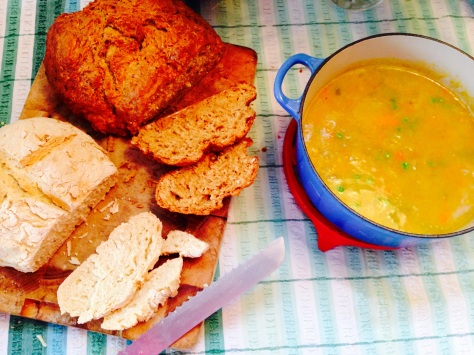 Daisy enters the bedroom to put forward her I-can’t-go-to-school-because-I’m-ill case. Ollie’s standing beside her. It’s well-argued: she has a sore throat, a cold, a tummy ache AND to top it all off, her shoulder injury, sustained from Sunday’s blog writing, is still playing up.

She looks and sounds ill, and I DID make her go yesterday. I take a deep breath,

“If you’re that ill, then you can stay off.”

I feel like I may have had the wool pulled over my eyes.

They leave the room joyously, arms wrapped round each other’s shoulders. They are the best of friends: Daisy cannot believe she’s been allowed a day off; Ollie can’t believe he’s got a companion for the day.

They play Secret Club; then organise all the plastic animals into family groups; then draw a collaborative treasure map. There’s not an argument in sight. Obviously this will not last, especially with the escalating feeling of mania in the air. 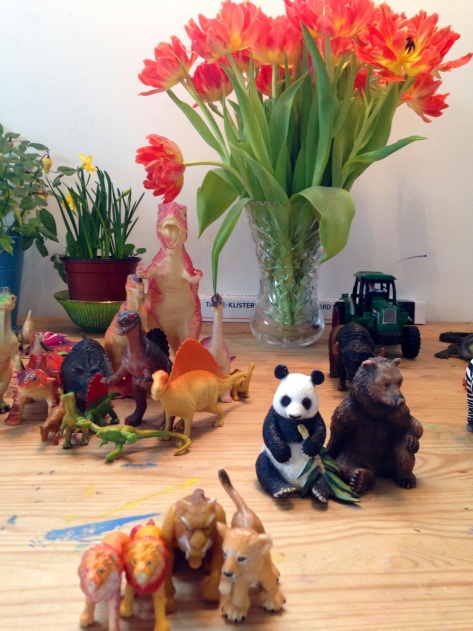 ﻿ As a calming down excersise (what planet do I live on), I decide we’ll make some soda bread for St. Patrick’s Day. All the recipes state: ”This is easy to make! Ready in seconds!’ They lie. Or rather they don’t take into account that some people might be trying to make it with children.

There should be a disclaimer on any recipe that contains such ingredients as treacle and honey (which this does): Be warned – these ingredients may cause an almighty mess when handled by children, and the ensuing clear up will add considerable time to the making of this loaf/cake/dish.

My children don’t even like black treacle and yet Ollie holds a spoon of it, destined for the mixing bowl, at a great height and tries to catch it on his tongue; Daisy, I find, squeezing spoonfuls of honey onto a medicine spoon and administing it to herself. It’s mayhem.

After repeatedly hearing myself use the phrase, “You’re really upsetting mummy now!” (not sure why I have to speak in the third person when I’m cross…), I manage to usher them out of the room so I can put the loaves in the oven, (one normal, one gluten-free).

We eat the soda bread warm with a delicious vegetable and sausage soup. Over lunch I try and explain about St. Patrick’s Day and the origins of soda bread, but I don’t really know what I’m talking about. Somehow I bring the potato famine into it, and then I make it sound like everyone in Ireland is poor and surviving on soda bread. Ollie goes silent and puts down his slice.

“So we’ve made this bread for the people? The poor people in Ireland?” he asks quietly.

I try to backtrack, but the damage is done: Ollie looks like he might cry and Daisy looks distinctly put off her bread. I am cursing myself for starting down a path with only half a fact.

If can avoid the pitfalls outlined above, this really does make a wonderful lunch and soda bread is a relatively quick loaf to make (depending on who you’re baking with….)

Mix all the dried ingredients in a large bowl.

Make a well in the middle of the dry ingredients.

Slowly add the liquid. Mix together to form a dough. You may not need all of the liquid. Shape into a round and place on the oven tray. Score a X on the top with a knife.

Bake for 50-60 minutes until golden; and hollow sounding when the bottom is tapped.

Brush with the melted butter and leave to cool.

Thanks to this great Guardian article: http://www.theguardian.com/lifeandstyle/wordofmouth/2014/feb/05/how-to-bake-perfect-soda-bread

And to this favourite website for the inspiration for the soup: http://agirlcalledjack.com/2015/03/16/ham-pea-mint-casserole-30p/&nbsp;

One thought on “Irish Soda Bread”