﻿I do the ‘three ingredients’ quiz on Tom over brunch (yes it is another fry-up, we’re turning into pigs).

“We have a chicken, a bag of watercress & an old jar of preserved lemons in the fridge, what would you make?”

He takes a swig of Earl Grey and glances over at the drinks-trolley-cum-recipe-book-shelf.

“What about Slater’s classic lemon and basil chicken with a watercress salad?”

Until last week all our recipe books were boxed up in the garage. We moved house a year and a half ago and the shelves in the kitchen haven’t quite gone up yet, (to be fair there’s been a whole house to renovate first).

But suddenly it got too much (I blame the blog) and I really wanted to see them again, shelf or no shelf, so Ollie and I went on an expedition into the garage, and after climbing over bikes and junk and getting covered in spiders’ webs, we found two boxes at the back. This is the tip of the iceberg as far as our collection goes, but it was a good start. Ollie was as much use as a chocolate teapot in lugging them out, he was too busy with the old toys that I had hoped he’d never clap eyes on again.

I could see the delight in Tom’s eyes later that night when he came home and saw that the drinks’ trolley had been commandeered into a library: ﻿ 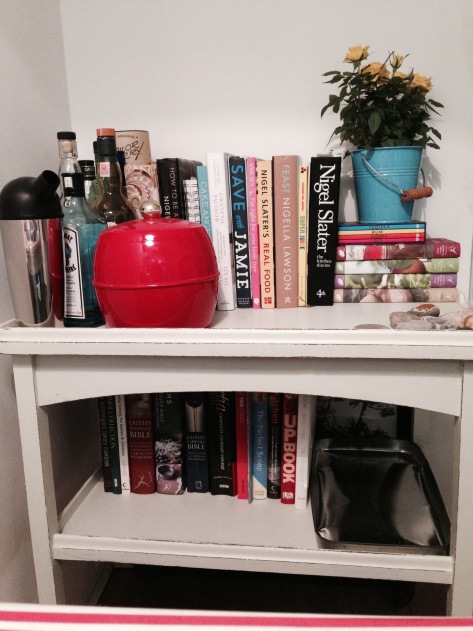 Today’s recipe comes from Real Food by Nigel Slater. According to the inscription in the front, I bought it for Tom Xmas, 2002. It was like a trip down memory lane looking through the food stained pages with notes joted in Tom’s handwriting next to the recipes. ﻿

Lemon and basil chicken was our favourite and we haven’t had it in ten years. Maybe it was because I didn’t cook it, or maybe it was the perfect mix of crispy chicken and tangy sauce and the chewy, soft roasted sweet potatoes, but it really was the meal I’ve most enjoyed so far this year. In Daisy’s words: “This is a triumph, dad!”

The only slight fly in the ointment was Ollie’s refusal to eat the chicken. He has been a vegetarian since Friday. We visited the sausage stall on the market and Daisy’s proudly told him: “Those sausages are cut up pigs and so is that bacon”. With Ollie’s sensitive disposition and his love of animals, this went down like a lead balloon and he wimpered and sobbed into my coat. He has firmly stuck to his beliefs though and not a jot of meat has passed his lips since. He uses Daisy as his loyal advisor and she relishes the role:

“Daiz is this chicken, meat?”

“Yes Ol! It’s a chicken that has been killed for us to eat it.”

Cue much whimpering and sobbing.

Not only do my family all live abroad, they are also pretty much all veggies: mother, sister, brother-in-law, nephews, aunt…. I am struggling to hang on to the only meat stronghold left in this family, and if Daisy carries on with her cheerful Meat is Murder campaign it looks like another one will have gone over to the other side.